Hidden aspects of mimikatz and
infrastructure protection by Sysmon+Splunk

In 2011 Benjamin Delpy released his side project that most recently became a key component of some ransomware worms that spread across Europe. Mimikatz became a ubiquitous tool in all manner of hacker penetrations, allowing intruders to quickly leapfrog from one connected machine on a network to the next as soon as they gain an initial foothold.

As we see, is a popular and powerful tool but what it can do?

What you need to know

Mimikatz is a console tool that has lots of modules. The full list of modules you can see here. I am going to highlight only the main three :

Kerberos – This module can be used without any privilege. It permits to play with official Microsoft Kerberos API – and to create offline ‘Golden tickets’, free, long duration TGT tickets for any users.

Why do you need to be scared?

In a nutshell, with adversary or any malware, you can get some credential and spread across domain in your network. The most famous cases are massive ransomware attacks known as BadRabbit and NotPetya that have infected thousands of networks causing millions of dollars damage. These worms get credentials by using modified and are spread via Microsoft`s Server Message Block (SMB) protocol.
It can make an impression that is some kind of virus or something like that but doesn’t hack anything, it just uses Windows features, so there is no hope that with updates it is going to be fixed.

As you can see, there are lots of reasons to detect mimikatz. The main question here is “How to do this?”. At the beginning of my way I tried to find some guides, articles, tutorials, etc. that would explain to me how to detect it. Most of them recommended only to monitor the access to lsass.exe with access mask 0x1010 and it’s very easy with Sysmon (EventID 10). But this way, we only see a usage of sekurlsa module.

With this option, I couldn’t see the start process and usage of any other module. This made me sad, that is why I decided to try harder to detect any command of any module. I made my own target configuration of for and started running all commands.

After all the tests I have noticed that each command has a unique call trace that allowed me to detect any single command. Following this way, I got call traces for 34 commands from 8 modules. Then I could exactly detect which command had been run. But this dream couldn’t become true: this technique has some problems.

First of all, each version of has other call traces for commands and it means that I need to have lists of call traces for all versions. It’s hard but it’s real. But the second problem killed last hope – nobody uses the legacy version from GitHub. More often advisories use PowerShell ( such Invoke-Mimikatz) or modified (such in BadRabbit or NotPetya) versions. So, it was interesting and funny experience, but it doesn’t work in real life.

Next step was to test PowerShell versions of and ransomware with this one to find common signs of usage. After all of this, I could make some conclusions.

For this research, I have used Sysmon+Splunk. I tested 2.1.1. Kitten Edition, PowerShell versions(Invoke-Mimikatz and Invoke-Mimidogz) and in ransomware(BadRabbit and NotPetya). All tests were made on Windows 7, Windows Server 12, Windows 10 and Windows Server 16 with latest updates. 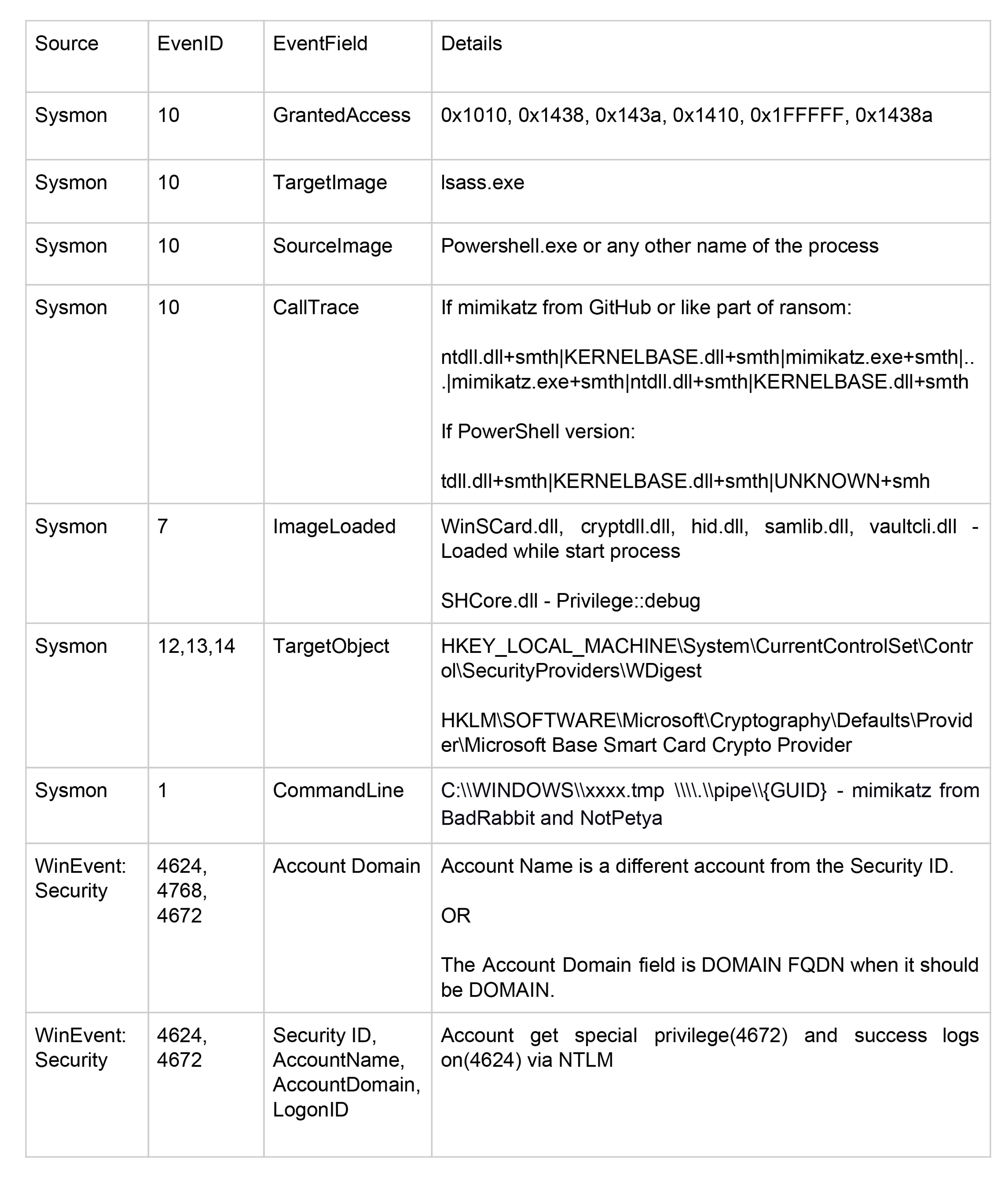 How to feel secure

The second recommendation –  if you don’t use any special password filters, smart-cards or special protocols you need to change the value RunAsPPL of  HKEY_LOCAL_MACHINE\\SYSTEM\\CurrentControlSet\\Control\\Lsa on 1. After this Lsass.exe will work in secure mode and any process without Microsoft certificate will not have access rights to LSA process.

And the last one, to protect against attacks related to Kerberos you should use Flexible Authentication Secure Tunneling (FAST) that is part of the framework for Kerberos Pre-authentication. FAST provides a protected channel between the client and the Key Distribution Center (KDC), and it can optionally deliver key material used to strengthen the reply key within the protected channel. With FAST in place, it is relatively straightforward to chain multiple authentication mechanisms, utilize a different key management system, or support a new key agreement algorithm.

With FAST enabled and required, brute forcing the reply key is no longer possible and the highest possible cryptographic protocols and cipher strengths are guaranteed to be used by Windows clients in their pre-authentication traffic with Windows Server Domain Controllers.

In this article, we explain mimikatz as a dangerous tool hackers use to steal the credentials and get into your system. Also, it may be used as a part of the virus code that will, later on, be spread all over the environment. Recently Mimikatz has become a very popular means of penetration to hack the infrastructure and take your money and sensitive data. It allows the intruders to quickly leapfrog from one connected machine on a network to the next once they receive an opening foothold. Our security engineers have prepared some pieces of advice on how to hunt the mimikatz using Sysmon and some SIEM, especially Splunk. They will help you prevent new attacks in the future. So, now you can feel secure because you are under defense. 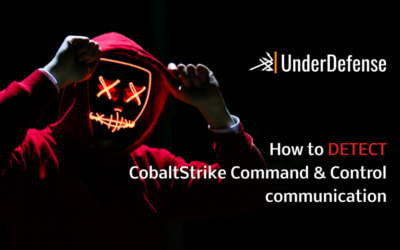 How to detect CobaltStrike Command & Control communicationBy Bogdan VennykCobaltStrike became part of the Cybercrime’s “toolset” almost in every Company breach. This growth is explained by the fact that CobaltStrike was leaked multiple times and became more...

END_OF_DOCUMENT_TOKEN_TO_BE_REPLACED 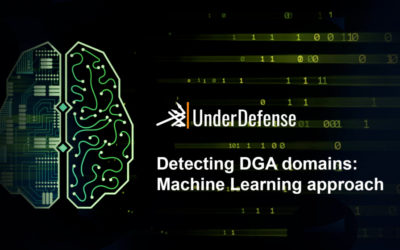 Detecting DGA domains: Machine Learning approachBy Alexander RagulinIn this post we are going to take a look at Domain Generation Algorithms (DGA) and an interesting way to detect them with the help of Deep Learning (LSTM neural net, to be precise). DGA domains are...

END_OF_DOCUMENT_TOKEN_TO_BE_REPLACED 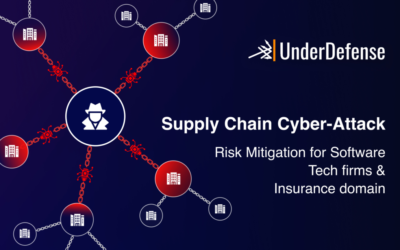 Supply Chain Cyber-Attack Risk Mitigation for Software Tech firms and Insurance domainSupply Chain Cyber Resiliency is emerging as one of the top risk management challenges needing addressed by the InfoSec industry in 2021By Nazar TymoshykCEO at UnderDefenseCurrent...

END_OF_DOCUMENT_TOKEN_TO_BE_REPLACED

Keeping cyber crime in secret | Stories by ISACA Board Member 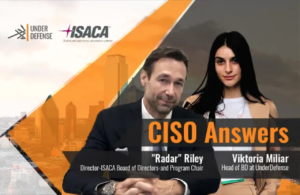